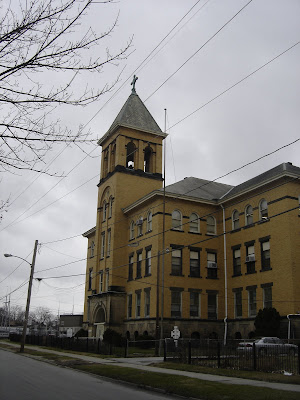 Does it look more like a school than a church? Well, that's because it was. A number of parishes, back in the late 19th to mid 20th centuries built a school first, with a chapel or other area set aside for a temporary church.
The polite way to describe this sort of thing is that they had a great respect for education and believed their children's education was more important than honoring God. My way of describing it was that they had their priorities backwards.
Now don't get me wrong. I know how terrible a time they had with the public schools of the time, which were too often used ( Still are, in the south. ) for Protestant indoctrination. I had teachers who did that, as late as the 60's. It was much worse before compulsory prayer was banned. I respect them for placing a high value on a Catholic education, but other means could have been used.
The worst of the problem? The whole idea was a trap. The parishes who built a church first were almost always able to build a school. Far too many of the parishes who built schools first ran into problems with money and general inertia. Many of them just faded away. They ended up with no church and a school that couldn't be fully utilized. 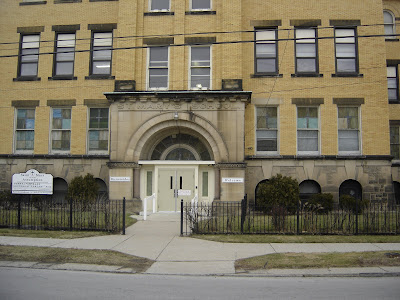 As school buildings go, this is a good one. 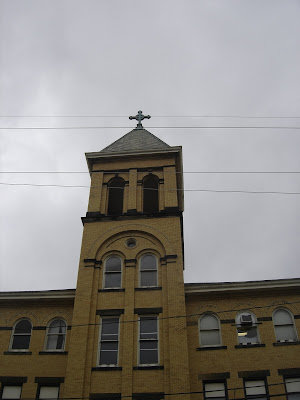 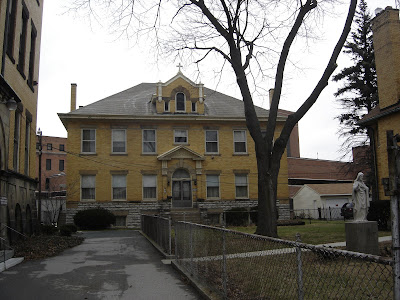 This building is right behind it. Anyone know what it was?
Posted by Jeffrey Smith at 10:47 AM

I believe it was the convent. I know it was still used by the Notre Dame Sisters a few years ago, but I'm not sure if they are still there.

It was a convent when I went to school there in the mide 60's, it's where the nuns who taught clasess at St Mary's

Actually, the original St. Mary's Church was on the intersection of Cherry & Washington. The building that was pictured was the new school (and the school chapel) built in the 1900's. Many of the Germans were leaving downtown and moving towards the Warren-Sherman neighborhood at that time. During the Great Depression, the congregation at St. Mary's was having services in he original church building and the chapel. The original church building was in disrepair, and maintaining it was becoming expensive. Also, more parishioners were attending services at the chol chapel than at the old church building. St. Mary's parishioners asked the WPA to demolish the old church building and services were held in the school chapel. The plan was to build a new church building next to the school (once the Depression ended), but sadly, that never happened. Yes, Bridget, you're right. The other building is a convent (currently, there is a charter school for autistic students at the old St. Mary's, I believe that they use that building too). The St. Mary's school building houses Assumption Outreach Center and the Autism Academy for Learning. The former rectory houses Women Blessing Women.

Yes, you'll find that one HERE.