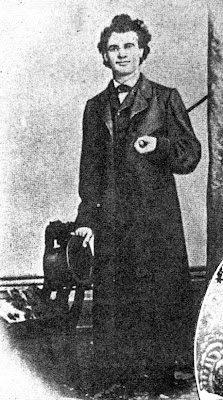 In February 1868, parishioners at St. Peter in Upper Sandusky were stunned by the tragic death of their young pastor, Rev. Joseph Reinhardt. Father Reinhardt, 26 years old and a native of Bavaria, had served at the parish for only 9 months, having previously served 2 years as pastor at New Bavaria (then called Poplar Ridge).

On Feb. 22, he was to attend confirmation services with Bishop Rappe at Bucyrus, which was then a mission of Upper Sandusky. Planning to take the early morning train from Upper Sandusky at 2:06 a.m., he arrived at the depot 10 minutes late. He tried his next option, waiting for a freight train and asking the conductor and brakeman if he could pay his way to Bucyrus. They refused, and the freight train left at 3:40 a.m.

Between 4 and 5 a.m., the night watchman found the lifeless body of Fr. Reinhardt lying on the tracks. Rumors soon followed that Father had been thrown off the train, but a Coroner’s jury ruled that the priest “met death by attempting to board the freight train in motion.”

Initially Fr. Reinhardt was buried in the sanctuary in front of the high altar of the church, but was later moved to the parish cemetery when a new church was built

That is a real interesting story. Was it common back then to bury priests in the church? Father Ponchell was buried in the sanctuary of the first St. Mary's church, as he died young and before the church was completed.

It was becoming rare. Never was really common, in this country, except in cathedrals and some 18th century churches like Christ Episcopal in Philadelphia. ( Some of the Penns and Gen. Forbes are buried there. ) By the 1860's, it would have been illegal in most cities.