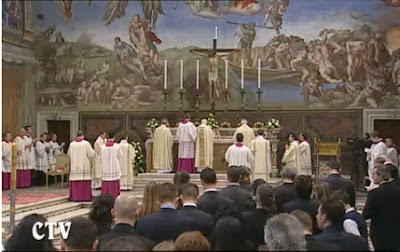 Fr. Blake, at St. Mary Magdalen, Brighton,UK has the Holy Father's baptism homily. I'd recommend reading it.
While you're there, if you click on "home", below the post, then scroll down, you'll find some good posts on the fact that he celebrated the Mass ( Novus Ordo ) in the old way, by joining the people in facing toward God, rather than turning his back on God to cater to the sort of spoiled brats who expect to be the central element of the Mass. Yes, that's my view of people who complain about the priest "turning his back on the people". They remind me of what someone once said about Winston Churchill, that at a wedding he wanted to be the bride and at a funeral the corpse. Always the center of attention.
We'll be seeing a lot more of this, and it has nothing to do with the extraordinary rite.
FYI, I think all the fuss and fluster over ordinary and extraordinary is a bit ridiculous. Let both be available and respected, then stop arguing and let them meld together into a new liturgy that combines the best of both. Arguing over such things is foolish, on both sides of the issue. I converted in 1972, but I was close enough to see the hard feeling caused by ramming changes down everyone's throats. The Holy Father learned from that mistake. Everyone should.
Posted by Jeffrey Smith at 7:41 PM