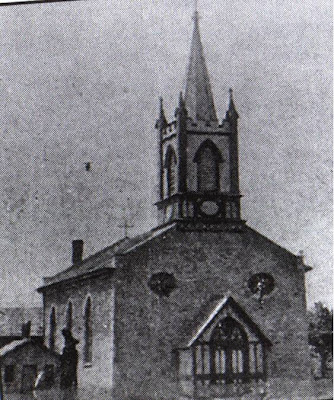 I've been puzzled, for the past few months, by Holy Angels, in Sandusky. It's considered the oldest extant church in the diocese, having been built in 1843. Here's a very early picture of it. It's not easy to grasp just how much of an accomplishment it was, at the time, to build anything this impressive, when all the other churches in the area were very simple frame or brick structures. Holy Angels went further, by building in stone and adding the extra Gothic detailing that was still rather rare. The first church in the United States to show Gothic influence was built, I believe, in 1807. The style was slow in spreading toward the frontiers, and the "Carpenter Gothic" was just beginning to attract notice, so this must have been quite a sight when compared to the simple Greek Revival and Georgian churches the area was used to. 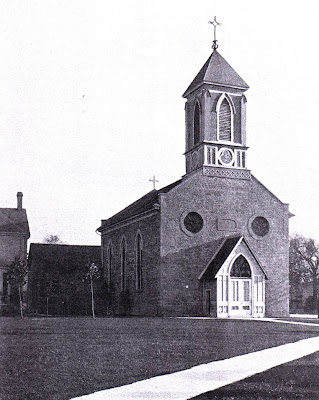 Here's what it looked like in c1900. Once again, we have a lost spire. One very unusual feature is the presence of those two round windows, and particularly the way they're arranged. A single rose window, in the middle, was common, but two, side by side, is rather odd. The transom over the entrance looks like it might have been stained glass. Very interesting building.
Now, as I've said, Holy Angels is considered the oldest parish church in the diocese, but there's a problem. 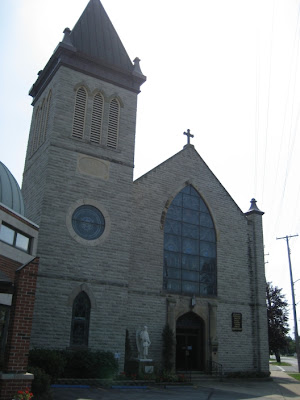 This is what it looks like today. Very nice building, but not the same. Everyone I asked agreed that the original church is somewhere in there, but no one could tell me when and how the change was made, until now.
A few days ago, Kevin Hammer drew my attention to an excellent blog called Sandusky History, written by the staff of the Sandusky Library Archives Research Center. I left a comment asking for information and they responded quickly.
Fr. Thomas P. Lamb, pastor from 1893 to 1903, carried out an expansion project which was finished by 1902. An 35-foot addition was built in front of the church. The original tower was removed and replaced with one at the side. The 1843 church is still there, but looks completely different from the front. Holy Angels is the oldest extant parish church in the diocese, with the caveat that St. Patrick's in Providence, built I believe in 1848, is the oldest to survive in its original condition. That nakes two to be recognized.
Posted by Jeffrey Smith at 5:35 PM

I am almost positive that Holy Angels church was founded by Rev. Joseph Machebeuf. He and his close friend Rev Jean Baptiste Lamy, both French missionaries arrived in Ohio in 1839, the same year Holy Angels was established. Their are the two main characters in the novel "Death Comes for the Archbishop" written in 1927 by Willa Cather. The life of Machebeuf is contained in a book entitled "Death's Deceiver" They both left Ohio and went to the Southwest, mainly in New Mexico. Machebeuf became the Bishop of Colorado and later Bishop of Denver. I cannot find any historical information on Holy Angels on the internet like St. Mary's Church. I grew up in Sandusky, but left in 1958 and now live in Florida. Yes, the Sandusky History blog has a great deal of information on Sandusky. Sandusky is mentioned several times in the Cather novel....ron schneider