Christmas at St. Joseph’s in Tiffin, around 1910

Happened upon this passage from “The Way It Used To Be,” a memoir by Seneca County native Bessie Sargent Pennell:

While it was still dark next morning they were awakened by the loud chiming of church bells. Bessie was not ready to wake up but her mother insisted they get up and get ready to go to St. Joseph’s church for the Christmas Mass. Eliza explained that she had always heard that this service and the music which accompanied it were very beautiful, and that she had always promised herself that if ever she were in Tiffin at Christmas, she would attend the mass. Reluctantly Bessie complied with her mother’s request. They slipped quietly out of the house without disturbing any one. By the time they reached the church the service had begun and people were gathered outside the church. This amazed Bessie. She could hardly imagine such a large crowd of people getting up so early in the morning to attend a church service even if it was Christmas. 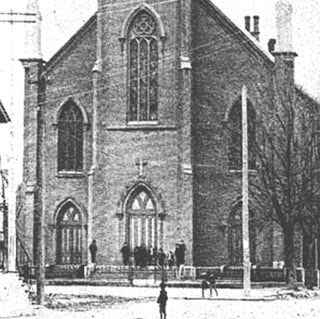 In a few minutes the crowd outside moved into the church and Eliza and Bessie moved with them into the vast crowd that filled all parts of the church. Later Bessie learned what had delayed their entrance. The image of the infant Jesus was being carried to a crib at a side altar. The lights, the music, the spirit which prevailed filled the young woman with awe.

Then the most surprising thing happened. A priest stepped into the pulpit and preached a beautiful sermon in plain English. She knew very little about the Catholic church but one thing she thought she knew was that the priest preached only in Latin and the congregation could not understand him. Why had people said that? She wondered. But the whole experience was almost overwhelming. A strange happiness filled her heart.
Posted by Kevin Hammer at 8:15 PM