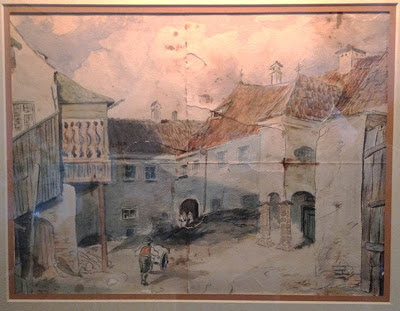 An earlier post about stained glass mentioned the Munich Studio of Chicago, an artistic firm comprised mostly of German immigrants.  David Stanley, a great-grandson of Munich Studio treasurer, Franz Ludwig Holtzschuh, shared a photo of a watercolor by Holtzschuh, along with this information:

He was born in Dinkelsbühl, Bayern, Germany in 1859, immigrated to the U.S. in 1885 and was naturalized in 1892. He moved with his family from Kentucky to Chicago sometime between 1892 and the 1900 census. This little painting has survived the years, folded, stained, torn and fixed with a black tar like glue to a backing (about 8.5 by 11). It is undated but it is easy to assume we are not looking at a scene in America.
Posted by Kevin Hammer at 8:06 PM