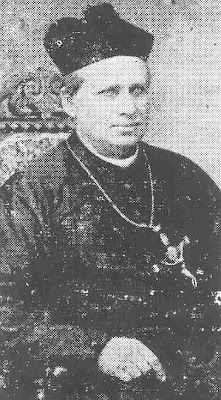 Fr. Patrick Hennebery was the first English-speaking member of the Society of the Precious Blood in America. A native of Ireland, he came to the seminary in Thompson, Ohio, in 1847 after meeting the Precious Blood order in Wisconsin. After his ordination at New Riegel in 1853, he served many parishes/missions in the area, and started several, including Spencerville, Kirby and Bascom.

In 1865 he went to California, where he tried for years to establish a Catholic college -- details here.

Later he gave missions in Australia, New Zealand, South Africa and India. There’s a chapter about his efforts in the book, "The Irish in New Zealand": Patrick Hennebery in Australasia, 1877-1882.

Upon his return to America, he continued his missions in the West Coast until his death in 1897. He is buried in Silver Terrace Cemetery, Virginia City, Nevada.

His full story can be found in the book “A Time to Sow and a Time to Reap,” by Paul Link C.PP.S.