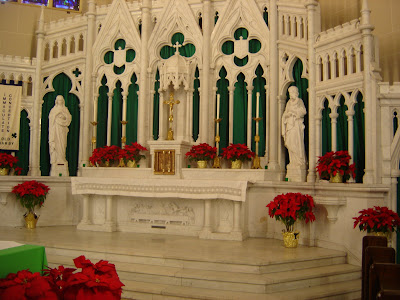 Yesterday's Tridentine Latin Mass at Immaculate Conception went very well. I had expected a good turn out, but considering the low temperature, I wasn't sure how good. The fact that seventy-five people braved the cold surprised everyone. In order to hear better, I sat in the front row, where I wasn't able to check the crowd. My first indication of how things were progressing was the expression on Fr. Paul's face when he came out to welcome everyone. It was memorable, to say the least. Even without a large contingent from St. Joseph's, we'd have had at least three times the dozen or so everyone was hoping for.
Everyone involved deserves thanks. Fr. Paul already works more in his retirement than most of the workforce. It would have been completely understandable if he's said it was just too much extra work. He didn't, though. He took on the extra burden without complaint. Don't forget all the extra prayers the priest has to say in the Tridentine, not to mention the usual excellent homily. Add the fact that he hasn't done it in decades and you'll see it's not to be taken lightly. He did very well and seemed to be enjoying himself.
Kevin Foose, organist and choir director, outdid himself. Even brought in his mother to do a wonderful solo of the Pie Jesu.
Don't ever doubt how much extra work is involved in preparing the altar. It takes four strong men to move the people's altar to the side, and those candlesticks are heavier than you'd imagine. I know. I moved one. As usual, at Old Darby, parishioners were there to help.
I'd particularly like to thank Trevor Fernandes and the parishioners of St. Joseph's. They offered every possible assistance and brought a group of experience servers. I was very impressed by their generosity.
The next Tridentine Mass at Immaculate Conception will be at noon, on February 17. Everyone's welcome.
Posted by Jeffrey Smith at 3:19 PM

Will the TLM be a regular Mass on Sundays? Are there other Parishes that will be celebrating the TLM in Toledo? I live in California however my young nephew lives in Toledo and I am encouraging him to go to the TLM. Also, if he decides to go, would anyone in Toledo be willing to take him under their wing. The TLM will be foreigh to him since he is only 22 years old.
Pax
Daniel

I'll do a post on the schedule at IC and at St. Joseph's later, and then leave another comment. Have to look up the details.

The schedule's HERE. If your nephew comes to the one at Immaculate Conception, tell him to look for an old coot hobbling about on a cane, and say hello.

I'm planning to bring a group (5-10) up for the Fernando Boltero exhibit and would like to include a visit to the city's most artistically significant Catholic church plus the one with the largest Hispanic community. Can you help me?

If I had to choose one, for architectural importance, I'd have to go with Rosary Cathedral. For the largest Hispanic community, I'd have to say SS Peter and Paul, in the Old South End. If you call the offices, I'm sure they'll be happy to show you around. If you have any questions, just let us know.