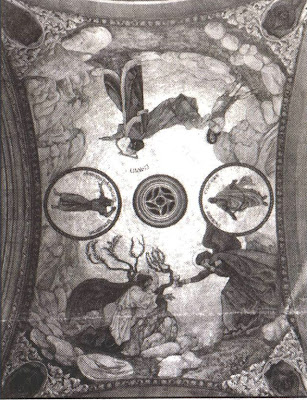 This is one of the ceiling murals in the aisles of the cathedral. It was painted by John ( Jan Henryk ) de Rosen, one of the most highly respected Catholic artists of the 20th century. De Rosen was born at Warsaw, in 1891 and died at Arlington, Virginia, in 1982. In the course of his life, he left behind a massive number of murals, mosaics, and paintings, in churches from Lvov to San Francisco. Pius XI commissioned two murals for his private chapel at Castel Gandolfo. The great cathedral at St. Louis has many examples of his mosaic work. Possibly his best known work is the enormous Christ in Majesty mosaic, in the apse of the National Shrine of the Immaculate Conception, in Washington. HERE'S a brief biographical sketch.
Toledo is fortunate enough in having just the murals he did for the cathedral, but there's more to the story. 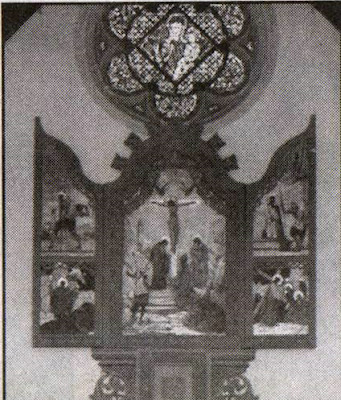 In 1945, John de Rosen painted an altarpiece and two murals for St. Mary's in Edgerton. I still haven't seen clear pictures from St. Mary's, but everything I have seen makes me suspect my source may have been right in calling it the most beautiful parish church, not just in the diocese, but in Ohio.
These pictures were scanned from an article in the Chronicle. I'll post more of the story tomorrow.

Posted by Jeffrey Smith at 6:26 PM

wonderful blog you have. North Eastern US churches are the greatest.